Pole Position Raceway was created in September 2005 in Corona, California, by co-founders Jason Williams and Ken Faught. During expansion, Williams and Faught teamed up with Brad Mark for the Las Vegas track.

MISSION STATEMENT: To create an exciting environment where casual drivers and professional racers have a chance to test their skills against one another on equal terms.
Introduce new people to the dynamic world of motorsports while giving hard-core racers and fans an experience that they will want to share with friends. 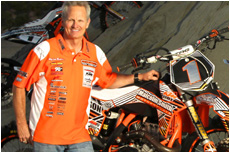 Kerry Peterson- Is the Chief Executive Officer of Pole Position Raceway and one of the founding members. Peterson  is a five-time motorcycle hillclimb world champion and one of Dirt Rider magazine's top 100 riders of all-time. Peterson has been part of the Pole Position Raceway brand of indoor electric go kart racing tracks since 2005, and is also the co-founder of Peterson Brothers Construction. 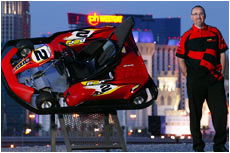 Brad Mark - is responsible for opening the Las Vegas market for Pole Position Raceway along with Jason Williams and Ken Faught. Brad serves as Chief Operating Officer, Secretary, and as a director, and is an integral part of the chain of high-performance go kart tracks. From 1997 through 2006, Mr. Mark served in various executive positions with the Richard Petty Driving Experience, a worldwide leader in Motorsports entertainment, including Director of Sales and Marketing, National Director of Sales and General Manager of Richard Petty’s West Coast Operations. Brad has also served as Chairman of the Board for Speedway Children’s Charities of Las Vegas, a non-profit organization granting funds annually to more than 50 local children’s charities in the Las Vegas community.

To help Pole Position Raceway achieve its full potential, the group took on several investors/friends including: